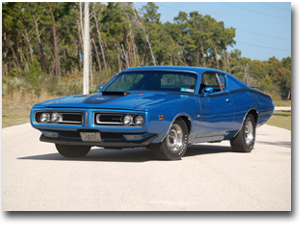 The Charger model designation expanded in "71 - there was the Base model, Custom, 500, SE, R/T and Super Bee. The performance Charger model the R/T was still the top Charger model, with its standard 440 c.i. engine and Torqueflite automatic transmission. Optional engines were the 440- Six Pack and 426 Hemi. (Hemi History) The usual heavy duty suspension, drum brakes and bucket seats were standard equipment. The R/T came with a blacked-out hood bulge and side tape treatment and two unique vertical tape stripes on each door. The vertical stripes were supposed to simulate side scoops. The Ramcharger functional hood scoop was optional equipment, but standard with the 426 Hemi engine. (sound of a Hemi)

The 1971 Charger got a totally new body, with ventless side windows, concealed windshield wipers and a semi-fastback roof design. Although the Charger looked longer than before, it was actually shorter by two inches - but it was wider. Breaking with the past, the Charger now sported a split front bumper design. It was the last year for the true high performance Charger as all the high performance engines were dropped in 1972.

Color keyed bumpers were optional on both the R/T and Super Bee as were front and rear spoilers.